The jury, which met on Tuesday, October 11, 2022 at the André Maginot National Federation in Paris, awarded the following awards:

The European Prize “Citizenship, Security and Defence” is awarded to the European Defence Network,

which brings together students and young professionals from different European countries, working on defence and security issues, with the aim of fostering knowledge of the institutions, as well as a European awareness, contributing to the development of a  European defence. 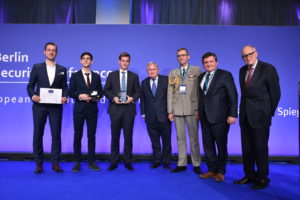 The Prize for European Values is awarded to Dr Hans-Gert Pöttering,

who has held leading positions, in particular that of President of the European Parliament from 2007 to 2009, and who has published widely on European issues, for his total commitment to the European construction, as well as to the defence and security of the European Union. 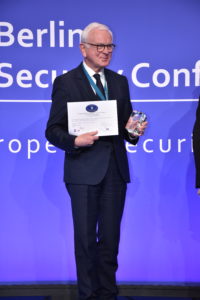 Prize for Citizenship to the Norwegian Life Boat Society,

For the Professionalization of training and education of the  Norwegian volunteer lifeboat crews. A new, structured, progressive, and comprehensive teaching and education program for Norwegian volunteer lifeboat crews has reduced the risk from serious accidents and improved organizational confidence and capability. This has directly benefited those 4200 individuals assisted and rescued by them each year, 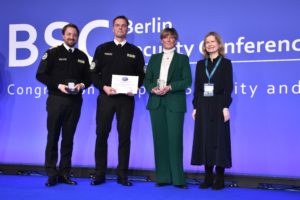 Prize for remembrance and reconciliation to Mr Hervé Altmeyer,

who has worked with energy and dedication for the Franco-German reconciliation, in partnership with the Deutsche Gesellschaft für historische Uniformkunde, mainly through ceremonies and activities in period uniforms. 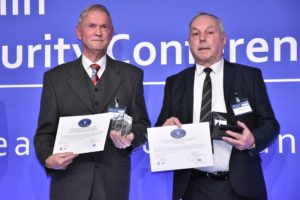 For the whole range of its activities, since 2001, aimed at recording memories, evidence and personal experience of the main historical events of the 20th Century, putting emphasis on life under totalitarian regimes. Using new methods to make history more appealing, POST BELLUM has contributed to the recovery and social cohesion of European society. 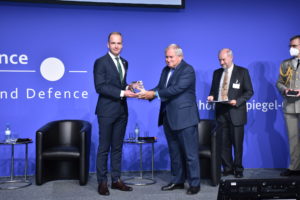 Mr Robert Walter, President of the European Security and Defence Association presents the award to

Special Award for “Peace and Security in Europe” to the non-governmental organisation LACHEN HELFEN e.V. (Germany);

For the whole range of its humanitarian action, since 1996, by soldiers and members of the police force taking part in external operations, adding to their normal activities by helping children living in conflict and crisis areas, and more especially for the building of a school in Mali – the first of its kind. 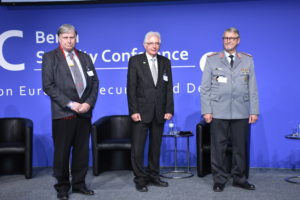 For the project, launched in 2015, to mark a Garden Way in “No Man’s Land” along the WWI Front Line – an idea suggested in a letter written by a young Scottish soldier just before his death in 1915 – from Nieuport on the Belgian coast to Pfetterhouse in the southern Vosges, a distance of 1000km including some 700 municipalities. In March 2020 the Belgian section was complete with plaques in place and gardens planted in France. People may choose whether to walk or ride the route by bicycle along this “Via Sacra” conceived as a Way of Peace, Remembrance, Reflection and Reconciliation. 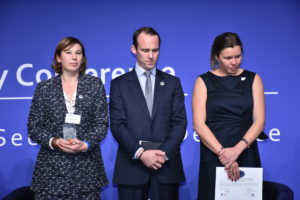 Special Awards by the Jury:

For his attachment to Europe, its Defence and Security, to the idea that a strong Europe may be built only with the support of its citizens, and for his help in ensuring that the presentation ceremony for  the “European Award for Citizenship, Security and Defence” takes place during the annual Berlin Security Conference, an exceptional setting for discussion of political, social, military, economic, and industrial questions. 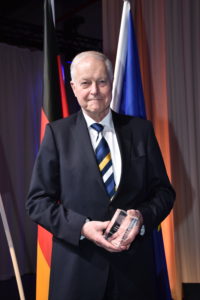 For his thesis on European bi- and multi-national expeditionary forces, rewarded by the Universities of Montpellier and Montreal, for his seminars organised for French and German students since 2013 and for the seminars run by the Forum for Defence and Strategy. 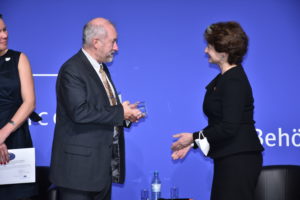 The jury of the European Award for “Citizenship , Security and Defence” met on October 1, 2019, in Paris, Federation André Maginot, Boulevard Saint Germain. The award ceremony took place on 26 November during the Berlin Security Conference

The Fondazione De Gasperi (Roma, Italy), for the project “freedom is not free”. The aim of this project is to involve the younger generations in thinking about strategic issues such as geopolitics, defence and security, and to prepare them, underlining their sense of belonging to Europe, to take, in the future, responsibilities within the European Union. 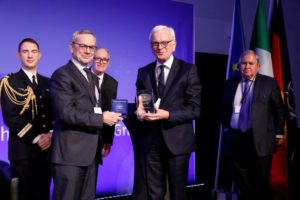 The Faculty of Political Science and Sociology of the Complutense University of Madrid (UCM) which, as part of the inter-university platform known as the Euro-Mediterranean University Institute (EMUI), teaches the EuroMed Master’s degree “The European Union and the Mediterranean.” The aim of the master’s degree is to train sociologists, social workers anthropologists, political scientists, psychologists, journalists, economists, lawyers and Arabic speakers, in working for a better integration between Europe, the South and the Eastern Mediterranean Sea. 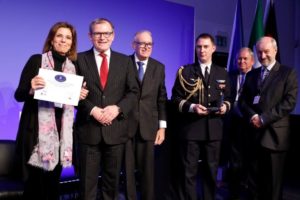 The Albert Schweitzer International Centre, located next to the German military cemetery in Niederbronn-les-Bains (Alsace/France). This centre welcomes groups of young people for several days, in providing them with an educational support dedicated to themes related to history, remembrance and citizenship. Like three other centres in Europe, located on places of remembrance (Lommel in Belgium, Ysselsteyn in the Netherlands and Usedom in Germany), it is run by the Volksbund Deutsche Kriegsgräberfürsorge e.V, a humanitarian organisation,  in charge, by the Federal Republic of Germany, of identifying, preserving and maintaining the graves of German war victims. 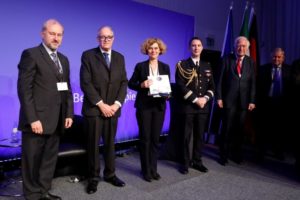 The editorial team of the four-monthly magazine “The European – Security and Defence Union”, for the quality of its articles and interviews, which have enabled European citizens to better understand the Defence and Security issues and policies, and have shown them the impact these policies can have on their daily lives. 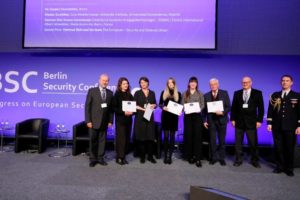 The jury of the European Award for Citizenship, Security and Defence met on 30 October 2018 in Paris, Fédération Maginot, 24 bis Boulevard Saint Germain. The 2018 winners are:

For all the activities relating to :« the European answer to new threats», but more particularly for the efforts made by a network of European reservists, for the exchanges with counterparts in Germany, Spain and Belgium, for the support given to the wounded of the armed forces, lastly for the transfer of experience from the war medicine to the civilian emergency units facing terrorist attacks 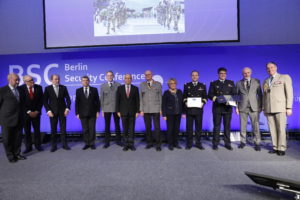 For his thesis on “the EU’s approach to peacebuilding within Common Security and Defence Policy (CSDP) operations and missions”, and for all his European engagement 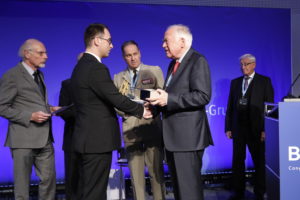 For all their works (publications, studies, reports, conferences) aiming at reinforcing the European Industrial and Technological Base. 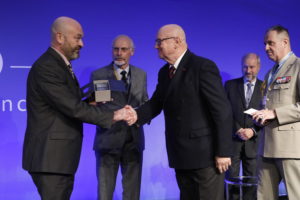 For their fruitful exchanges in their support to those wounded in the service of their Nation, in particular for crossing the Channel in 2017on two sailboats, ,which is a  strong historical symbol 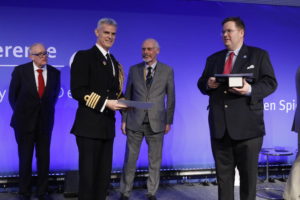 Which  champions free movement and EU citizenship rights in EU 27 and in the UK, after BREXIT.

These awards will be presented on Tuesday 27 November 2018 in the context of the Berlin Security Conference. This conference is one of the largest yearly event on European Security and Defence, gathering a thousand participants coming from 50 countries (Members of Parliament, politicians and representatives of armed forces, security organisations and industry 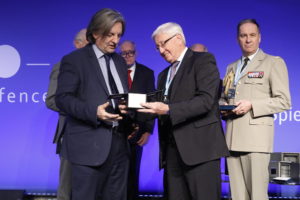 In addition, each winner has  received the Medal of the President of the French Republic. 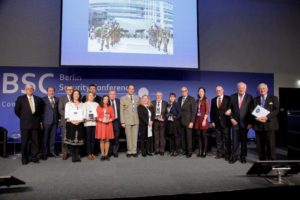 The Jury for the European Award for Citizenship, Security and Defence met on Thursday 12 October 2017 in Strasbourg, in the premises of the Parliamentary Assembly of the Council of Europe.

After the deliberation of the Jury, the 2017 Awards are attributed to the following candidates :

For the project « The Road of the Citizen in the Mirror of History » which is intended to remind young people that Human Rights should not be taken for granted and to show how belonging to the European Union helps to defend these rights and to feel more secure than in the isolated past. 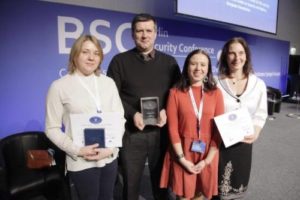 For the exceptional participation of the population of this small town in commemorating, in 2014 and 2015, the hundred year anniversaries of the First World War, through many rich and varied activities and in particular, by welcoming delegations representing the British regiments which fought in the Battle of Loos (September/October 1915), including numerous schoolchildren. 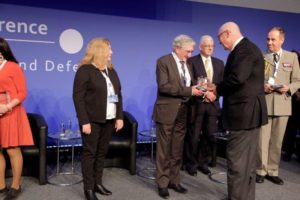 For her work on the representation of conflicts and trauma in museums and memorials, for setting up her website « ComMemories » with the aim of modernising Remembrance and making it an inspiration, not a burden, for her practical guide « Speaking about tragic events with your child », to encourage the publication of her books on « Remembrance explained to children » . 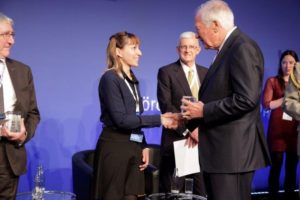 These awards have been presented on Tuesday 28 November 2017 in the context of the Berlin Security Conference.

for their organisation of the Vth EuroDefense Conference of Young Europeans and its follow-up.  70 young delegates, university graduates and military cadets, from six countries of the European Union met to exchange ideas, opinions and reflections in a multidisciplinary context about “The Defence of Europe: Past, Present and Future”,

for its training of young researchers, studies on military ethics, publications, conferences and networking of researchers, policy-makers, military practitioners, and the public, mainly in the Nordic States,

On the above photography, colonel Manfred Rosenberger, member of the Board of Directors of the International Society for Military Ethics in Europe presents the award to colonel Magnus Magnusson, Swedish Defence Attaché in Berlin.

for commemorating, each year and publicising, especially in 2014, the first battles on the Marne,  with the aim of informing younger generations, in connection with the Saxon Military History Association from Dresden, the Royal Fusiliers in London and the German International School in Paris

for her research works and teaching of the European Common Security and Defence Policy, specifically for her comprehensive studies of the elaboration, implementation and perception of the policy by a European public.

On the above photography, Mr Uwe Proll, Publisher and Editor in chief of the Behörden Spiegel presents the trophy to Mrs Hildegund Rüger, mother of Carolin

Winner of a Special Award by the Jury : Elementary school COUSTEAU, France.

Special Award “Information and education on Defence and Security in the civic life : Liga dos Amigos do Museu Militar, Portugal.

Winner of the European Award :

DOBROSOLOWO School  (Poland) for all actions aiming at teaching the European identity, the respect of Human rights, and tolerance,  through a modern system of education.

Association ” LE SAILLANT DE SAINT MIHIEL” (France) for all actions aiming at teaching to the young generations local history, in particular during the First World War, and for all French-German ceremonies organized by the association since  2002.

The European Award ” Citizenship, Security and Defence ” has been awarded to : The European Security Round Table, Brussels – Belgium.

The Award ” To the benefit of Youth” has been awarded to : Peace School of Grenoble – France.

The Award “Europe of the Regions” has been awarded to : The House of Europe – Rennes – France.

The Award “Memory and Reconciliation” has been awarded to : Major (rc) Simon of the A.N.O.R.A.A.- sector 410 Essonne – France.

The Award ” Research and Technology” has been awarded to : Mr Daniel ANTONY, Besançon – France.

The Award “Europe of Peace” has been awarded to : EUROCORPS, Strasbourg – France.

The European Award for “Citizenship, Security and Defence ” 2011 has been awarded to :

M. Hartmut BÜHL for the edition of his magazine “The European Security and Defence Union”, for his personal commitment and the skills of his editorial team.

The ex-aequo second prize has been awarded to:

The Association of Portuguese defence, security and citizenship young listeners (DECIDE), which aims to interest young people in defence issues, to make these issues affordable and for its desire to bring closer military and civilian domains at the European level.

The CiDAN special prize has been awarded to :