The European Award for Citizenship, Security and Defence

The European Award for Citizenship, Security and Defence is intended to reward outstanding efforts towards promoting European citizenship, and European security and defence awareness. The prize was first awarded in 2011, under the High Patronage of the President of the European Council.

The prize is organised annually by the association “Civisme Défense Armées Nation” (CiDAN), together with the European Interparliamentary Security and Defence Association, and with the support of the Behörden Spiegel.

The jury, which met on Tuesday, October 11, 2022 at the André Maginot National Federation in Paris, awarded the following awards:

The European Prize “Citizenship, Security and Defence” is awarded to the European Defence Network,

which brings together students and young professionals from different European countries, working on defence and security issues, with the aim of fostering knowledge of the institutions, as well as a European awareness, contributing to the development of a  European defence.

The Prize for European Values is awarded to Dr Hans-Gert Pöttering,

who has held leading positions, in particular that of President of the European Parliament from 2007 to 2009, and who has published widely on European issues, for his total commitment to the European construction, as well as to the defence and security of the European Union.

Prize for Citizenship to the Norwegian Life Boat Society,

For the Professionalization of training and education of the  Norwegian volunteer lifeboat crews. A new, structured, progressive, and comprehensive teaching and education program for Norwegian volunteer lifeboat crews has reduced the risk from serious accidents and improved organizational confidence and capability. This has directly benefited those 4200 individuals assisted and rescued by them each year,

Prize for remembrance and reconciliation to Mr Hervé Altmeyer,

who has worked with energy and dedication for the Franco-German reconciliation, in partnership with the Deutsche Gesellschaft für historische Uniformkunde, mainly through ceremonies and activities in period uniforms.

After several reports due to the COVID 19 pandemic , the award ceremony  for the 2020 edition has taken place during the Berlin Security Conference on 24 November 2021 , 18h00. 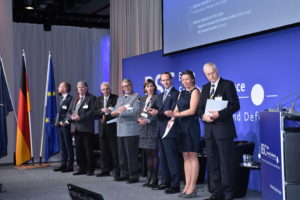 Meeting in the Ecole militaire in Paris on Tuesday 13th October 2020, the Jury decided on the following Awards:

For the whole range of its activities, since 2001, aimed at recording memories, evidence and personal experience of the main historical events of the 20th Century, putting emphasis on life under totalitarian regimes. Using new methods to make history more appealing, POST BELLUM has contributed to the recovery and social cohesion of European society.

Special Award for “Peace and Security in Europe” to the non-governmental organisation LACHEN HELFEN e.V. (Germany);

For the whole range of its humanitarian action, since 1996, by soldiers and members of the police force taking part in external operations, adding to their normal activities by helping children living in conflict and crisis areas, and more especially for the building of a school in Mali – the first of its kind.

For the project, launched in 2015, to mark a Garden Way in “No Man’s Land” along the WWI Front Line – an idea suggested in a letter written by a young Scottish soldier just before his death in 1915 – from Nieuport on the Belgian coast to Pfetterhouse in the southern Vosges, a distance of 1000km including some 700 municipalities. In March 2020 the Belgian section was complete with plaques in place and gardens planted in France. People may choose whether to walk or ride the route by bicycle along this “Via Sacra” conceived as a Way of Peace, Remembrance, Reflection and Reconciliation.

Special Awards by the Jury:

For his attachment to Europe, its Defence and Security, to the idea that a strong Europe may be built only with the support of its citizens, and for his help in ensuring that the presentation ceremony for  the “European Award for Citizenship, Security and Defence” takes place during the annual Berlin Security Conference, an exceptional setting for discussion of political, social, military, economic, and industrial questions.

For his thesis on European bi- and multi-national expeditionary forces, rewarded by the Universities of Montpellier and Montreal, for his seminars organised for French and German students since 2013 and for the seminars run by the Forum for Defence and Strategy.

The jury of the European Prize “Citizenship, Security and Defence” met, on October 1, 2019, in Paris, at the headquarters of the Federation André Maginot, 24 bis Boulevard Saint Germain.

After deliberation, the 2019 list goes to the following candidates:

To  the De Gasperi Foundation,

to the Faculty of Political Science and Sociology of the Complutense University of Madrid (UCM), for the master EuroMed : “the EU and the Mediterranean”.

to the Albert Schweitzer International Centre, located in Niederbronn-les-Bains (Alsace/France)

to the four-monthly magazine “The European – Security and Defence Union” 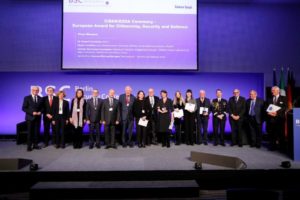 If you have any question write to : euro-award@cidan.org

You can see the winners at the address : https://cidan.org/winners/

Each of them, in addition to the Prize, has received the Medal of the President of the French Republic